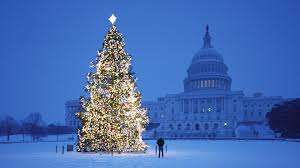 He will judge between many peoples
and will settle disputes for strong nations far and wide.
They will beat their swords into plowshares
and their spears into pruning hooks.
Nation will not take up sword against nation,
nor will they train for war anymore.
4 Everyone will sit under their own vine
and under their own fig tree,
and no one will make them afraid,
for the Lord Almighty has spoken.
5 All the nations may walk
in the name of their gods,
but we will walk in the name of the Lord
our God for ever and ever.

It was an important idea, one of the founding principles of our country:  Freedom of religion.  But it was not their intent to create a nation that denied God.  While many of the founding fathers were, in effect, Deists in their spirituality, God was always acknowledged at least by presumption.  Freedom of religion is not intended as denial of God.

Over the course of history, probably about the time of the Civil War, when our national identity was still only a few decades old, the phrase “In God we trust” arose as a national motto, although it was not made official until 1956!  “In God we trust” affirms God’s presence and role in the world, but does not define God.

The phrase resonates not only with Judeo-Christian scripture (throughout the Bible, but see especially Ps118:8; Ps 40:3; Ps 73:28; Prov 29:25), but is also echoed in the Qur’an [for instance: “Our Lord, we have indeed heard a Crier calling to faith, saying ‘Trust in your Lord, so we have trusted…” (Quran 3:193) or “[The messenger and the believers] trust in God, in His Angels, His Scriptures, His Books and His Messengers…” (Quran 2:285)].  It resonates with the Hindu perspective of God being everywhere.  It affirms the innate human sense that there exists something larger than oneself.

As we talk about the coming of the Prince of Peace, as we call this the season of peace, as we pray for peace in the world, let us remember where our trust and hope lie.  I pray that we as a nation can remember that, whether encountering our own fellow citizens or those of other nations.