Today is St. Nicholas Day!  For many this marks the beginning of the Christmas holiday season (although, clearly, that is not the opinion of US retailers).  The traditions of St. Nicholas also become the seeds that grow into many of our cultural Christmas traditions.

Saint Nicholas is one of the most popular saints, especially in Greek and Eastern Orthodox traditions, but is also honored throughout Europe with thousands of churches named for him, including three hundred in Belgium, thirty-four in Rome, twenty-three in the Netherlands, and more than four hundred in England.  While there are many stories about his deeds, there is actually no historical documentation that he lived! 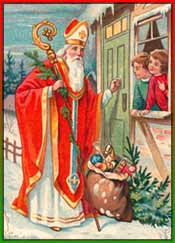 Traditionally he is said to have been born in 270 AD in Patara, in the coastal region of what is now Turkey, to very wealthy parents who raised him to be a devout Christian.  His parents died when he was very young, and he took seriously to “sell what you have and give the money to the poor.”  It is said that he gave all the fortune away caring for the poor, the hungry, the sick.  His good works were widely recognized, and he was made Bishop of Myra while still a young man.

In the most famous legend about him, St. Nicholas hears of a poor family with three daughters.  Their father could not offer a dowry, which at that time and place meant that the girls would never marry, and in the absence of any other employment possibilities, would probably have to become prostitutes.  He decided to help them by tossing three bags of gold through the window of their little house, one for each daughter.  Some versions say one bag each night for three nights; some say it was over the course of years, as each girl reached marriageable age.  In one version, the father wanted to discover the benefactor, but St. Nicholas avoided this by tossing the last bag down the chimney, where it landed in the girl’s stocking which was drying by the fire.

Some biographers claim Nicholas attacked the heresy of Arius (who denied the full divinity of Christ) in a personal way—he traveled to the Council of Nicea and slapped Arius in the face! As the story goes (and this should be taken as fantasy because there are pretty good records of the council, and Nicholas isn’t mentioned), the other bishops at Nicea were shocked at such rude behavior and relieved him as bishop. But then Jesus and Mary appeared next to him, and they quickly recanted.

One of the oldest stories showing St. Nicholas as a protector of children takes place long after his death. The townspeople of Myra were celebrating the good saint on the eve of his feast day when a band of pirates from Crete came into the district. They stole treasures from the Church of Saint Nicholas to take away as booty. As they were leaving town, they snatched a young boy, Basilios, to make into a slave. The emir, or ruler, selected Basilios to be his personal cupbearer, as not knowing the language, Basilios would not understand what the king said to those around him. So, for the next year Basilios waited on the king, bringing his wine in a beautiful golden cup. For Basilios’ parents, devastated at the loss of their only child, the year passed slowly, filled with grief. As the next St. Nicholas’ feast day approached, Basilios’ mother would not join in the festivity, as it was now a day of tragedy. However, she was persuaded to have a simple observance at home—with quiet prayers for Basilios’ safekeeping. Meanwhile, as Basilios was fulfilling his tasks serving the emir, he was suddenly whisked up and away. St. Nicholas appeared to the terrified boy, blessed him, and set him down at his home back in Myra. Imagine the joy and wonderment when Basilios amazingly appeared before his parents, still holding the king’s golden cup. This is the first story told of St. Nicholas protecting children—which became

his primary role in the West. 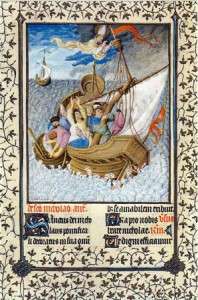 There are also stories telling of Nicholas calming a storm at sea and drawing grain from a shipment that was miraculously replenished.  Other stories tell of Nicholas saving his people from famine, sparing the lives of those innocently accused, and much more. He did many kind and generous deeds in secret, expecting nothing in return. Within a century of his death he was celebrated as a saint. Today he is called the patron saint of a great variety of persons — children, mariners, bankers, pawn-brokers, scholars, orphans, laborers, travelers, merchants, judges, paupers, marriageable maidens, students, victims of judicial mistakes, captives, perfumers, even thieves and murderers! He is known as the friend and protector of all in trouble or need. 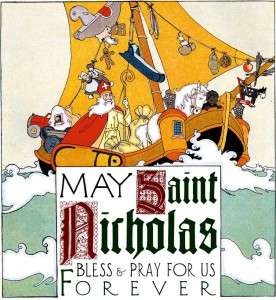 Somewhere along the line, probably tied to the gold-giving story, people began giving presents in his name on his feast day. When the Reformation came along, his following disappeared in all the Protestant countries except Holland, where his legend continued as Sinterklass, the name that became Santa Claus. Martin Luther replaced this bearer of gifts with the Christ Child, or, in German, Christkindl. Over the years, that became repronounced Kriss Kringle, and ironically is now considered another name for Santa Claus.  Even his own name, St. Nick, itself is often used to refer to Santa.  (And that leads us to Coca-Cola influence on Santa Claus…..)